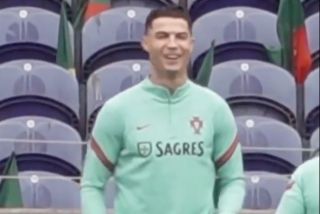 Cristiano Ronaldo made fun of Arsenal right-back Cedric Soares for the way in which he jumped to header the ball during Portugal training.

The two Premier League stars were filmed during a training session at the Estadio do Dragao, ahead of Portugal’s World Cup play-off against North Macedonia later tonight, and the spirits were high.

Cedric leaped into the air to head the ball during a rondo training drill and Ronaldo couldn’t help but mock the Arsenal star, as seen in the video below:

Cederic has some improving to do in order to be as good a header of the ball as Ronaldo.

Ronaldo went on to mimic Cedric by jumping into the air with his legs curled up behind him. He proceeded to laugh with his fellow Portuguese team-mates.

They will be hoping it’s still a laughing matter when the full time whistle blows tonight.