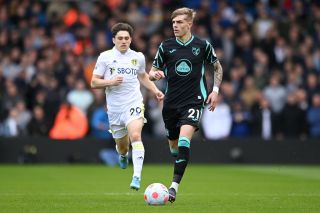 Although it has been a difficult season for Norwich City, Brandon Williams appears to be enjoying himself at the relegation battling outfit.

Of course, at this stage of Williams’ career, he’s delighted to be playing regularly in the Premier League.

The Manchester United loanee sounds like he wants to do that again next season, rather than sit on the bench at Old Trafford.

“I’m playing games now and I love it,” Williams told the Daily Mail. “I can’t wait for the weekend so I can get to the stadium. There would be no point in me going back to United and just sitting on the bench.

“I want to play and feel I’m better equipped for the Premier League after this experience. Whether it’s at United or somewhere else, we’ll deal with that in the summer. But I’ve got a job to do here at Norwich.

“My first season with United was great. I played 36 games, 17 in the Premier League.

“Then lockdown came. We went into the new season after a very short break and from there, Luke (Shaw) was on fire and Alex (Telles) had just come in. I could have stayed and trained but I knew deep down I had to get out and prove I was a Premier League player.”

Williams will have to wait until United hire a new manager to make a decision on his future.

Whether it’s Erik ten Hag, Mauricio Pochettino, or one of the unlikely candidates, Williams has a priority to play regularly next term.

The left-back made 36 appearances under Ole Gunnar Solskjaer during his breakthrough season and I can’t see him being in the United team that often, unless he is willing to be patient and fight for his place against Luke Shaw and Alex Telles.

Williams can also play at right-back.