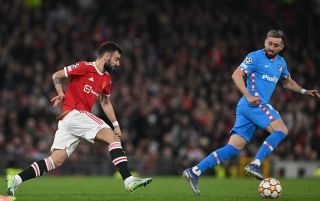 Bruno Fernandes is close to agreeing a new Manchester United contract after a breakthrough in talks last week.

The Guardian claims that, subject to final details, the Portuguese midfielder will sign a deal to 2026 or more likely 2027.

Fernandes joined United from Sporting Lisbon in 2020 on a five-and-a-half-year contract, with an option to extend for a further year, but it is thought that the board believes he deserves to become one of the team’s top earners with a new deal.

The 27-year-old’s form may have dipped this season, but there is still no denying that Fernandes is one of our best players.

However, talkSPORT has had a lot to say about Fernandes being on the verge of getting a new contract at United. Speaking about Fernandes’ new deal, ex-Chelsea striker Tony Cascarino told the popular radio station (as cited by the Manchester Evening News): “It is a very strange set of circumstances where you are offering someone with three years left on their contract a new five-year deal.

“When he got a hat-trick [against] Leeds, you thought, ‘Wow, this is going to be some season for United.’ He frustrates me.

“He is a talent, but he is always waving his arms about. It feels like he is complaining and moaning about his team all the time in the game.

“I don’t think they should be offering him a deal yet. If he gets to the stage where he is playing like the Bruno Fernandes who first arrived at the club over the next year I would be saying ‘yeah’ to a new contract. Not now.”

Fernandes has managed 9 goals and 14 assists across all competitions this season, but he has struggled to find consistency to his game unlike in previous campaigns.

🔥 “Bruno Fernandes is a light weight!”

❌ “He’s not a leader. Doesn’t work hard enough, doesn’t do enough off the ball, doesn’t track back – he’s a luxury player!”

Jones called Fernandes a “light weight” and said: “He’s not a leader. Doesn’t work hard enough, doesn’t do enough off the ball, doesn’t track back – he’s a luxury player!”

Let us know in the comments if you think Fernandes deserves his new contract.