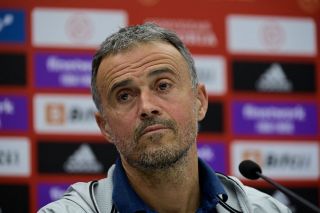 Spain head coach Luis Enrique has responded to speculation connecting him with a move to Manchester United.

The former Barcelona manager, who won the treble during his time at Camp Nou, is currently in charge of La Roja and they’ve already booked a place at the Qatar World Cup later this year.

The Spanish beat Albania 2-1 on Saturday evening and they face Iceland on Tuesday night in another friendly match.

Manchester United goalkeeper David de Gea was omitted from Enrique’s squad, which makes it interesting that he is being strongly linked with the job at Old Trafford.

Moreover, Enrique intends to be the one to lead Spain at the World Cup.

At a press conference earlier today, Enrique was asked directly about the United links.

“I’ll be in Qatar with Spain because I’ve given my word and there’s nothing that makes me more excited than representing my country at the World Cup,” Enrique said, as per Diario AS.

“And even more so with this national team and with this federation. I can’t say it louder, but not more clearly.

Spain were semi-finalists at Euro 2020 but lost to eventually winners Italy.

Enrique will hope it’s a campaign to remember in Qatar because it doesn’t sound like he will be arriving at Old Trafford anytime soon. His comments come after it was claimed by British press that Enrique had gone from outsider to top contender for the job.

It is understood that United want to carry out a number of interviews, though there’s no point speaking to Enrique if his mind is already made up.