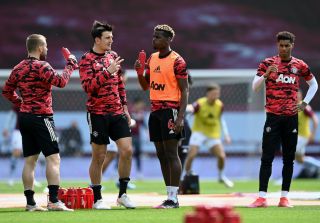 Manchester United will focus on contract talks with Marcus Rashford and Luke Shaw after agreeing a new long-term deal with Bruno Fernandes.

That is according to ESPN, and it makes sense with Rashford and Shaw both on deals until 2023, but they need to start performing at a higher level in order to warrant new contracts.

It sounds like United have already decided that they want Rashford and Shaw tied down to long deals and the report suggests they are considered part of a key group of core players that the club want to keep at Old Trafford.

While that is a fine logic to use with some players, it is becoming clearer that United may need to reset the squad a little, especially with a number of players leaving due to expiring contracts this year.

Bruno Fernandes deserves a new deal – that is not up for argument – but I don’t think Shaw is the long-term answer at full-back and Rashford has had a shocker this season.

I hope to be proven wrong on Shaw and that Rashford rediscovers his form of old. The left-back was at his best when games were played at empty stadiums, which I think may help explain why he has struggled this season.

The last thing I want to see is United keep rewarding players with contracts regardless of performances.

ESPN add that Rashford is open-minded about his future, despite claims from the media can he could look to leave Old Trafford in the near future.

The next manager will be tasked with the getting the best out of Rashford.