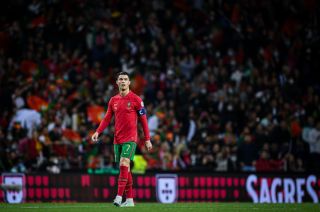 Given how North Macedonia left Italy stunned in their play-off semi-final in Palermo on Thursday, Portugal have been well and truly warned not to take the threat of their opponents lightly in their decisive match on Tuesday, which will decide whether Cristiano Ronaldo is going to the World Cup in Qatar later this year.

We obviously would like Ronaldo to go to the World Cup since he’s one of the greatest players of all-time, but it’s probably his last chance to play on the biggest stage in international football. He is not the only United player with sights set on World Cup qualification as both Diogo Dalot and Bruno Fernandes featured in the starting line-up against Turkey.

At 37, Ronaldo is coming to the end of his playing career, but I still hope he is at Manchester United for at least another season.

The Portuguese star has been warned by North Macedonia president Stevo Pendarovski ahead of their game against them in the World Cup play-off final.

Pendarovski tweeted after his country’s impressive win over Italy, writing: “Get ready @Cristiano, you are next!”

This is brave from Pendarovski, but in this tie North Macedonia have nothing to lose because they go into the game as underdogs.

North Macedonia caused an upset against Italy and it left Roberto Mancini, who has surprisingly been linked with the United job, with egg on his face.

Portugal defeated Turkey in their first qualifying play-off and a win over North Macedonia would book their place at the Qatar World Cup.