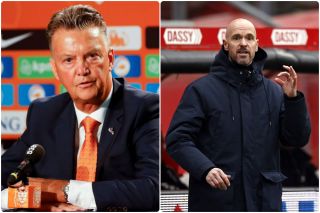 The Netherlands head coach, who managed United between 2014 and 2016, has hit out at the club for prioritising its commercial interests over football matters.

Before anyone decides to jump down Van Gaal’s throat, surely you can see that the argument he makes actually backs up our firm belief that the Glazer family are terrible owners. And, he should know what they’re like to deal with since he has first-hand experience as a football manager.

Anyhow, with Ten Hag considered one of the front runners for the job at Old Trafford, Van Gaal was asked by Dutch media to give his verdict. It was pretty damning but truthful from a Manchester United perspective.

“Erik ten Hag is a great coach and that is always good for Manchester United,” Van Gaal told reporters, as per Voetbal International. “But Manchester United are a commercial club, so it’s a difficult choice for a coach. He’d better go to a football club.”

Van Gaal sounds like a man who found out the hard way, but we are not going to excuse the football he subjected to the Old Trafford faithful. He’s not wrong but as a fan I can only hope for the best appointment and that the club sorts the mess out from above.

Richard Arnold, John Murtough and co all have their work cut out to change how United are viewed in the football world.

And, like we’ve strongly suggested in the past, this is a matter of needing new owners at our football club.

Ten Hag currently worked under a completely different structure at Ajax and it remains to be seen if he could have the same impact at a club like United.