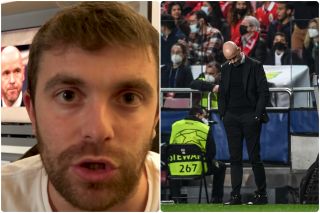 Erik ten Hag has been approached by two more clubs since being interviewed for the Manchester United job.

That’s according to Italian journalist Fabrizio Romano, who claims the Ajax manager is a wanted man as it looks possible that he will leave the Dutch giants at the end of the season.

It's true, Erik ten Hag has been approached by two more clubs after meeting with Manchester United. No final decision yet on Man Utd side – he's been interviewed last week, positive feeling but club board's still considering other options. 🔴 #MUFC

United remain undecided about who they want to become their next manager.

While Erik ten Hag appears to be the front runner and most favoured option amongst fans, the United board are still considering other options.

Romano says Ten Hag, who has done a fantastic job at Ajax, has nothing agreed with United.

The meeting is understood to be a positive one but Ten Hag is waiting to find out United’s final decision. On top of that, Ten Hag has two other clubs looking for his services next season.

It is also noted that Donny van de Beek is keen to see Ten Hag get the job at Old Trafford as the decision is likely to have an impact on his future at the club.

Spain head coach Luis Enrique has jumped from being an outsider to ‘real contender’, and Paris Saint-Germain manager Mauricio Pochettino has always been strongly linked with the job.

Sevilla boss Julen Lopetegui is seen as another contender.