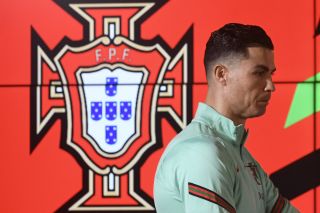 Cristiano Ronaldo addressed the media ahead of Portugal’s play-off final against North Macedonia.

The Manchester United star refused to reveal whether the 2022 World Cup in Qatar would be his last granted Portugal can do what Italy couldn’t – by beating North Macedonia.

Ronaldo stressed that he will continue playing football at the highest level as long as he feels that he is in good enough shape to deliver on the pitch. At 37, it would be fair to say that he is coming to the end of his career, but it wouldn’t surprise me if Ronaldo played for another 5 years.

“I’m the one in charge [of my career], full stop,” Ronaldo told the press, as per Marca.

It’s going to be a huge night for Ronaldo – but he is not the only United player likely to be involved.

Diogo Dalot and Bruno Fernandes both started in the last game against Turkey and they will be expected to feature again versus North Macedonia.

A World Cup with Ronaldo is better than one without.