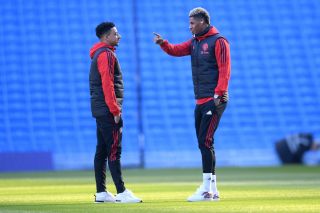 The latest reports suggest Manchester United will soon begin contract talks with Marcus Rashford, amid claims he was unhappy at Old Trafford.

The England international didn’t receive a call-up to Gareth Southgate’s recent squad, and on top of that, Anthony Elanga has come into the team at his loss.

At 24, Rashford shouldn’t be looking over his shoulder at academy graduates, but he is and it’s hard to argue with Ralf Rangnick’s decisions since becoming manager. Elanga has gone on to make his senior international debut for Sweden.

Following reports that Rashford is ‘considering his future’, as per Fabrizio Romano, came suggestions that Arsenal were interested (via Daily Mirror).

Other reports even suggested Rashford had told friends he was quitting United.

“It is something that obviously you don’t want to hear,” Chadwick said.

“I can’t see it happening. Rashford is obviously an idol at Manchester United for what he’s done, on and off the pitch, but for one reason or another, it hasn’t really clicked into place for him this season.

“I can’t imagine that Rashford will leave United because of what he is at the club, but something has got to give somewhere.

“Rangnick doesn’t have him in his best 11 and that is frustrating for Marcus. I’m sure it will be a case of seeing and talking to the new manager about what his plans are for him.

“But I would like to think he will still be a Manchester United player next season, but it is worrying when you hear about other big clubs like Arsenal [wanting to sign him].

“But if he did go, which would be really sad to see, it would maybe be a move abroad for a challenge in a different league. But it would certainly be very strange to see him playing for another club in the Premier League that isn’t Manchester United.”

Rashford currently looks a shadow of his former self.

Hopefully Rangnick can find a way to rebuild his confidence because United will need him at his best to go the remainder of the season unbeaten in the Premier League.