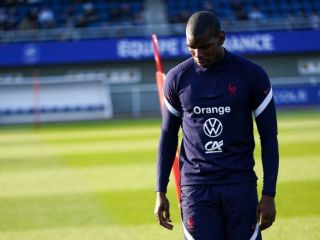 Manchester United midfielder Paul Pogba has had to sit out training with the France national team.

Pogba featured for France in their friendly win over Ivory Coast, playing 89 minutes before being substituted, though the midfield star’s future is up in the air and we don’t know how many more games he’ll play for the club.

The Frenchman remained coy over his future when asked while on international duty.

Real Madrid, Paris Saint-Germain and Juventus are said to be interested in Pogba this summer. There was also a laughable report that suggest Newcastle United and Aston Villa wanted to sign Pogba, but why would he leave for them when he has complained about the lack of trophies he’s lifted at Old Trafford?

According to multiple reports in France, Pogba is out of France training due to a slight injury on his left foot. Baptiste Durieux has backed up the claims to explain why Pogba was missing from the training session.

Baptiste also says that United defender Raphael Varane, who injured his right foot against the Ivory Coast, had specific training which suggests he only suffered a knock.

We hope to have both back fit at United later this week!