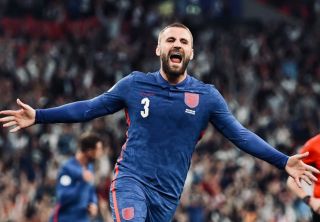 It was a pretty mixed performance from Luke Shaw against Switzerland last night.

The left-back stood off Xherdan Shaqiri before the former Liverpool man delivered a cross that was met by Breel Embolo to make it 1-0.

Shaw made up for his error by scoring the equaliser just before half-time.

Shaw was questioned on his differing form for club and country before praising the environment that Gareth Southgate creates.

After beating Switzerland 2-1 on the night, Shaw answered the media by saying (via Manchester Evening News): “The environment here that Gareth creates, you always enjoy it. I think when I come here, for me it’s about enjoyment, playing games with a smile on my face and enjoying it.

“I feel like here, when I come here I always do that, we all love playing for our country.”

He added: “I think everyone does. It’s always important to feel like you’re wanted.

I have alluded to this on the blog previously when talking about Harry Maguire, but it doesn’t surprise me that these players find it easier playing for England because international football is not played at the same level as the Premier League or other top leagues.

The games are played at a much slower pace Maguire is another example of a player who has found playing for England a lot easier in recent times.

Moreover, this may show that Shaw is unable to deal with the pressure of playing for Manchester United.

I think you could say that about a couple of our players.