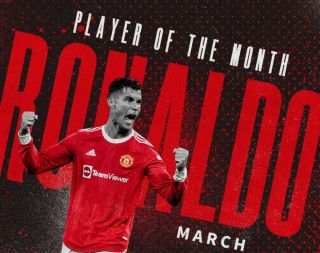 Cristiano Ronaldo has been voted as Manchester United’s Player of the Month in March.

It wasn’t a good month for United as the Reds crashed out of the Champions League and fell behind in the race for a top four finish in the Premier League.

However, Ronaldo still managed to score 3 goals in 2 games for United, which all came during his hat-trick against Tottenham Hotspur.

Ronaldo was able to beat the likes of Jadon Sancho and Fred to win this months’ award. It is his third time winning it this season.

🗳️ The votes are in — @Cristiano is our Player of the Month for March! 🙌#MUFC pic.twitter.com/0nPxbg5Ki7

Fingers crossed he can guide us to a fourth place finish this season, but right now I don’t think that looks likely.