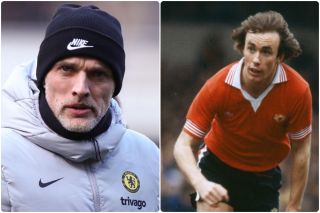 Former Manchester United midfielder Sammy McIlroy has weighed in on who the club should appoint as their next manager.

We have seen a number of names linked with the job in recent weeks, with Erik ten Hag being interviewed for the role on Monday.

PSG manager Mauricio Pochettino is seen as a fellow front runner with the Dutchman, while Luis Enrique and Julen Lopetegui are also featured on the candidate list.

United are expected to carry out more interviews in the coming weeks and McIlroy, who is fondly known as the last Busby Babe, thinks Thomas Tuchel should be the chosen one.

Speaking to the Mirror, the former United midfielder said: “Manchester United is an unbelievable job for any manager, but it’s a hard job. Things have got be done, that’s for sure.

“Why not Thomas Tuchel at Chelsea? He’s a serial winner. The next manager decision is going to be the most important decision in a long, long time. Consistently the player are not putting in performances.

“If anything goes wrong, I don’t feel as though we have a leader to sort it out. Is it just an excuse they are playing so badly because the players don’t know who the manager is going to be at the end of the season?”

Chelsea owner Roman Abramovich was hit with massive sanctions by the UK government due to his ties with Russian president Vladimir Putin, which has paved way for the Tuchel-to-United rumours.

The current speculation may underestimate the strength of Tuchel’s connection to Chelsea, but he will want clarity on the future of the club soon, which will only come when they find new owners.