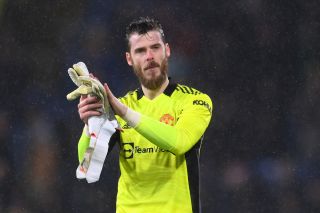 Lazio have been linked with a possible move for Manchester United goalkeeper David de Gea, according to reports in Spain.

The Biancocelesti are looking to find a replacement for the outgoing Thomas Strakosha and Pepe Reina.

As you’d expected, the Serie A club has been linked with an array of goalkeepers in recent months, including Chelsea shot stopper Kepa Arrizabalaga.

According to Spanish outlet Fichajes.net, as cited by The Laziali, Lazio’s sporting director Igli Tare is incredibly keen to sign De Gea in the summer. He believes the Spaniard is the right fit for Maurizio Sarri’s side.

There has been reports of a new contract for the 31-year-old at Old Trafford, but it would be best for the club to at least wait until a new manager is appointed, especially when he will surely have a decision to make on who he wants as his first choice keeper.

De Gea has been in good form this season and appears to be in the running for the club player of the year award.