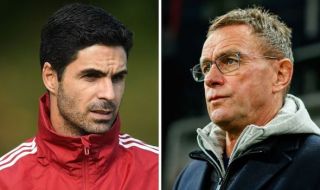 With our two fiercest rivals fighting for the Premier League title and Chelsea on course to finish third, fourth spot remains a possibility for Manchester United.

Arsenal are in pole position, while West Ham United and Tottenham also stand a chance.

Wolves, who are currently sat in eight, are surely out of the running. The best top four markets are available at BoyleSports if you fancy a go at beating the bookie, with United currently priced at 11/2 and Arsenal deemed favourites.

Arsenal are currently sit 4th after 28 games played. The season started slowly for them, but Mikel Arteta has turned things around.

In their last outing, Arsenal recorded a 10th Premier League victory in 13 games. They’ve only conceded eight goals in that 13-game period.

However, former United defender Gary Neville gave his reason to doubt Arsenal in their bid for top four whilst speaking on Monday Night Football.

Neville said: “The reason I said that you can’t fully trust Arsenal is because they’ve not delivered yet. The pressure is now on them, in the sense that there is now an expectation that they will finish fourth.

“I think they will finish fourth, but they’ve got Tottenham still to come, they’ve got Manchester United to play.

“Now they have got to go on and prove that we can all trust them, that they can go and deliver Champions League football, which was against all expectations at the start of the season.”

Tottenham Hotspur are in fifth place – one point clear of Manchester United. They can boast back-to-back wins in the Premier League for the first time in 2022 after beating West Ham prior to the international break, but I would be surprised if they were the team to finish fourth at the end of the season.

David Moyes’ side started the campaign strongly but it looks like the Hammers are switching their focus to the Europa League, after knocking Sevilla out in the last round. I can’t see them pipping Arsenal, United and Tottenham to a fourth place finish.

This is a big drop from finishing runners-up under Ole Gunnar Solskjaer last season. This season we were supposed to challenge for the title, but now we’re talking about squeezing into the Champions League places.

It was disappointing to crash out of the Carabao Cup in September – just like when we blew our chances of a run in the FA Cup. Then to see our Champions League campaign end in the last-16 made it all worse.

We’ve not had one consistent run this season and that is why we’ve fallen into a battle with Arsenal and Tottenham. One that looks like it will be won by the team at the Emirates.