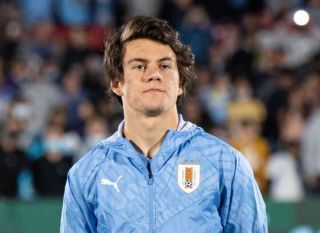 It looks like Manchester United youngster Facundo Pellistri will be going to his first World Cup.

Uruguay booked their place at the 2022 World Cup with a 1-0 win over Peru last night.

Giorgan de Arrascaeta’s first half winner put the Uruguayans in a favourable position with one game remaining in their qualifying campaign.

Without wanting to discredit the right winger, it’s bizarre that he is getting starts for his country when at Alaves he has only managed 10 minutes in the whole of 2022. They must rate him because United striker Edinson Cavani only made a substitute appearance.

Pellistri got 84 minutes against Peru and carried out his defensive duties impeccably.

Uruguay had to dig in and ground out the win and Pellistri played a key role in that, albeit from an attacking position.

The 20-year-old made three successful tackles and four ball recoveries.

After the match, Pellistri took to social media and admitted it is difficult to how he feels after securing World Cup qualification: “Difficult to express in words what I feel right now. Today we all played it, and between all of us we got the classification that we expected so much. When Uruguay plays three million run… always”

Pellistri has a lot to look forward to this year, but it will be interesting to see if he goes back out on loan or stays at United next season.

It would be fair to say his current loan spell in La Liga hasn’t worked out.