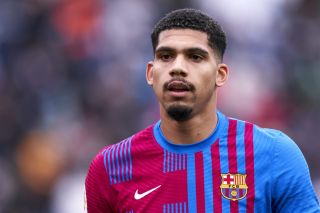 Manchester United are reportedly looking to sign a new centre-back and it sounds like Barcelona’s Ronald Araujo is on the club’s transfer wish list this summer.

According to ESPN reporter Moises Llorens, Manchester United and Liverpool are both willing to offer bigger contracts than what his present club has proposed.

The report states that Barcelona have tabled an offer worth €5m annually, whereas the Premier League duo are willing to better that with an additional €3m, which would amount to €8m per year.

However, Spanish publication Marca suggest United are favourite’s for the Uruguayan’s signature after he rejected Barcelona’s latest contract offer.

United’s defence is currently a far cry away from being what it needs to be for a team that expects to challenge for Premier League titles and European success. However, the same can be said about our midfield.

Meanwhile, Liverpool appear to be well stocked at the back, though a defender of Araujo’s quality could see Jurgen Klopp shake things up a little.

Harry Maguire has been terrible this season and he should be looking over his shoulder once a new manager is appointed at Old Trafford, especially if the squad gets the makeover it requires in the summer.

Keeping Raphael Varane fit next season is another must.