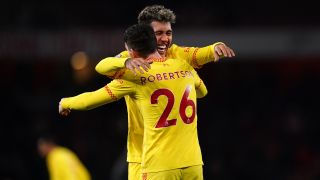 Former Manchester United midfielder Kleberson thinks a player like Roberto Firmino would help get the best out of Jadon Sancho and Marcus Rashford at Old Trafford.

The Brazil international may have fallen out of favour at Anfield in recent times, but that doesn’t mean Firmino will be moving to Old Trafford anytime soon.

In 318 appearances for the Scousers, he’s registered 96 goals and 66 assists, which is a pretty good return for a forward that is not a pure centre-forward.

However, Kleberson merely points out that he’s the kind of player his former club need.

“For the Brazil national team, he plays higher up, but for Liverpool he’s a bit deeper. He’s learned so many things from Jurgen Klopp and he is so smart on the pitch.

“If Manchester United wanted to make a chance, he’s a good player that can help, especially with Marcus Rashford and Jadon Sancho on the wings. Firmino can help those players create space when they’re on the attack.

“That’s the type of player Manchester United should be looking at. A player with Firmino’s quality can help release the team.”

Firmino plays in a false-nine and his role in the Liverpool team allowed Mohamed Salah and Sadio Mane to shine – but there’s no point pretending Klopp’s two wide men only perform when the Brazil international is in the team.

Moreover, the Liverpool No. 9 is out of contract at the end of next season but that still doesn’t change my mind about this being a non-runner.

Kleberson rightly points out that the 30-year-old makes space with his movement, although he isn’t the only selfless forward in the game, and it remains to be seen what United’s attack will look like under the next manager.