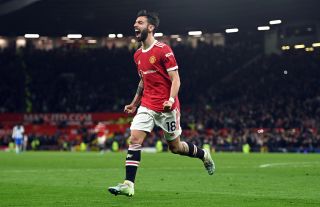 Bruno Fernandes is reportedly close to signing a new contract with Manchester United.

According to Portuguese outlet O Jogo, talks between the midfielder’s agent and United are going well and it looks like a deal will be struck.

This could see Fernandes sign a 5-year deal keeping him at Old Trafford until 2027, on top of a salary hike which will see the Portugal international become one of the highest paid players at the club.

With Paul Pogba likely to leave in the summer when his deal expires, it should be seen as a priority to tie Fernandes down to a long-term contract.

It is noted in the report that Fernandes believes United will be back fighting for the biggest honours soon and he wants to be part of the project. You won’t find many fans against that idea, although it certainly feels like we are miles off competing with Manchester City and Liverpool for the Premier League.

Unless United finish in the top four this season, the Reds will be gearing up for another season without Champions League football, which has been the case far too often since Sir Alex Ferguson announced his retirement in 2013.

Fernandes has not been at his best this season but that could be said about every United player.