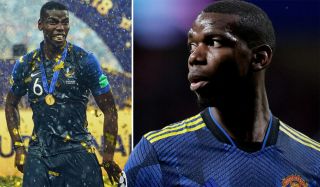 Manchester United midfielder Paul Pogba has opened up about his home recently being burgled by thieves, who stole his World Cup medal from 2016.

The France international may frustrate us the best of times with his inconsistent displays, but there’s no doubt that everyone felt a degree of sympathy with Pogba after what sounds like a horrific incident at his home recently.

It happened last week while Pogba was playing for United in the Champions League against Atletico Madrid – during the second leg at Old Trafford.

Speaking to Le Figaro, Pogba revealed that his World Cup winners’ medal was among the items stolen.

He also revealed that the nanny working at his home had to lock herself and Pogba’s children in a room while the intruders made their presence known.

It doesn’t come as a surprise that the nanny in question was shook by these events, but Pogba is grateful that nobody was harmed during the break-in, though he was scared by the fact his kids were at home.

“There were jewels from my mother, my world champion medal,” Pogba said.

“What scared me the most was that my two children were at home with the nanny during this incident.

“She overheard everything, called my wife and security, then locked herself with the boys in a room. For several days, she was shocked.”

Pogba’s contract expires at the end of the season and it wouldn’t surprise us if he left Manchester for Paris, Turin or Madrid.