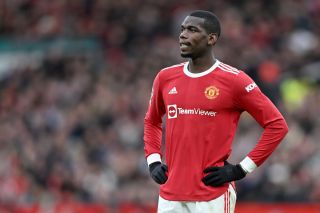 This is usually when the Manchester United midfielder is questioned about his future, but this time around it sounds like his time at the club is coming to an end.

Earlier this week, Pogba expressed how happy he was to join up with the France national team, leaving Manchester behind after a disappointing Champions League elimination at the hands of Atletico Madrid in the last-16.

To make matters worse for Pogba in Manchester, he recently had a burglary at his home while his children were inside with a nanny. Thankfully nobody was hurt in the ordeal.

Pogba exclusively told French outlet Le Figaro that he is not satisfied with the last five seasons he has spent at Old Trafford and he also questioned his role in the team.

“You have to be honest, it does not satisfy me, over the last five seasons, but really not at all. This year, it is dead, we won’t win anything yet. Whether it’s with Manchester or at another club, I want to win trophies.”

The France international can leave on a Bosman at the end of the season and while he is carefully keeping his options open, it seems he is heading for the exit.

He has been linked with moves to Paris Saint-Germain, Real Madrid and a return to Juventus in the past.

Pogba was part of the United team that won the League Cup and Europa League under Jose Mourinho in 2017, but there has been nothing to get celebrate since. The 29-year-old puts that down to inconsistent team selections.

He added: “It’s simple, at the Blues, I play, and, in addition, at my position. I know my role, I feel the confidence of the coach, the players. It’s normal, to feel this difference with Manchester, because it’s hard to be consistent when you often change position, game system or partners.”

Another worrying line from our midfielder, in the same interview, suggests that he has been unsure of his role in the team. It comes across as a damning assessment of Ralf Rangnick’s management and those before him.

“On the coach, we get along very well, he gave me a role that I know, but, at Manchester United, do I really have a role? I ask the question and I don’t have the answer.”

I can’t be the only United fan fed up with these interviews, or should I say outbursts (?), but at the same time it’s important to understand that something is very wrong at Old Trafford.

We need players who want to take Manchester United back to the top.

2 responses to “Paul Pogba questions his role at Manchester United”