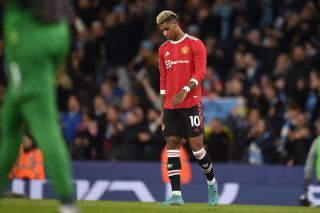 Marcus Rashford has been out of form at Manchester United for what feels like an eternity.

Following a barren spell that has seen him score just five goals in almost as many months, Rashford has now lost, what was once a nailed-on starting spot, in the Red Devils’ first team.

Not only is Rashford, 24, enduring a tough patch domestically, but Gareth Southgate’s latest 25-man England squad to face Switzerland and Ivory Coast does not include the United number 10.

Facing an uncertain future at Old Trafford, leading transfer expert Fabrizio Romano recently reported that the Englishman is ‘considering’ leaving the club he has spent his entire career with.

Marcus Rashford is considering his future. He’s concerned about his lack of game time, source close to Man Utd forward tell me – he’s always been professional but he wants clarity. 🔴🏴󠁧󠁢󠁥󠁮󠁧󠁿 #MUFC

Although several top clubs are likely to be interested if Rashford really is serious about leaving United, very few sides have actually been linked with making a move this summer.

However, that could all be set to change and one person who feels David Moyes’ West Ham United could be an outsider to land the 24-year-old is former Liverpool and England full-back, Glen Johnson.

Speaking to BettingOdds.com (as quoted by West Ham Zone), Johnson said: “If Marcus Rashford was playing the way he could play then this wouldn’t even be a conversation as he’d be starting for Manchester United every week.

“I think he’s a great player. West Ham are a team now that are beginning to knock on the door so in that case everything’s a possibility.”

Since making his senior United debut all the way back in 2016 under former manager Louis van Gaal, Rashford has gone on to feature in 297 matches, in all competitions, directly contributing to 151 goals along the way.