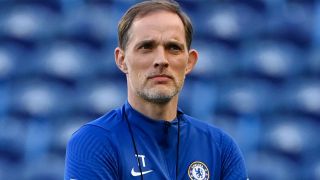 There is a lot of contrasting information doing the rounds.

Sky Sports were told by sources that links to Chelsea manager Thomas Tuchel are just “media talk”, presumably hyped up by retired footballer turned pundit Jamie Carragher, who boldly suggested Chelsea’s turmoil has given United the chance to land their perfect manager.

It would make sense to pip a rival’s manager, especially one as good as Tuchel, but it seems easier said than done.

Jamie Jackson from The Guardian told talkSPORT this morning that United are “interested” in Tuchel and he thinks they would prefer to appoint the German coach over Mauricio Pochettino and Erik ten Hag, who are seen in the media as two frontrunners for the job.

😳 “Ten Hag is one of the favourites but they are interested in Tuchel now.”

✅ “If you ask me who I think Utd prefer, it would be Thomas Tuchel.”

Such an appointment would upset Chelsea fans but they have a lot more to worry about right now. They are still in the land of unknown in regards to new owners following sanctions imposed on Roman Abramovich.

Thankfully, we are not worried about upsetting them and feel that appointing Tuchel would be a massive coup for United.

I still think Pochettino or Ten Hag is more likely at this stage.