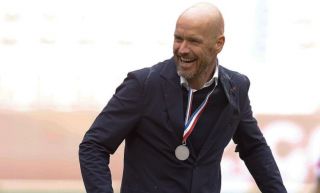 It has emerged that Erik ten Hag was interviewed for the Manchester United job on Monday.

According to the Daily Mail, United sources said a number of candidates will be interviewed in due course, but a direct dialogue with Ten Hag began early this week.

Meanwhile, the same report claims Chelsea manager Thomas Tuchel is no longer considered a viable option. The German coach is likely to wait and see what the future holds at Stamford Bridge once Chelsea find new owners.

United hope to make a decision before the end of next month in order to have a new manager in place after the end of the season.

If they leave it late, it will put whoever is in charge of the team on the backfoot before a ball is kicked next season.

However, there is an interesting line in the article that we should look closer at, and it reads: “United are urging caution over the Ten Hag speculation.”

The board know that Ten Hag is a popular candidate among fans, but this strongly suggests that they are nowhere near decided on who will take over the squad this summer.

Pochettino is considered as a fellow frontrunner for the role and it will be interesting to see if United have an interview scheduled for him in the coming weeks.