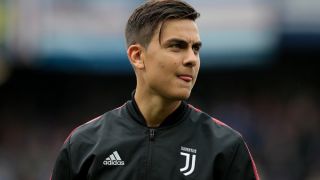 Paulo Dybala looks destined to leave Juventus once his contract expires this summer after Juventus director Maurizio Arrivabene confirmed an extension is unlikely.

The comments were cited by respected journalist Fabrizio Romano following transfer links between the Argentina international and Manchester United.

“We won’t extend Paulo Dybala’s contract,” Arrivabene said. “We’re not gonna do any other proposal – the decision has been made.”

Juventus director Arrivabene confirms: “We won’t extend Paulo Dybala’s contract. We’re not gonna do any other proposal – the decision has been made”. 🇦🇷 #Dybala

Dybala’s agent will now open talk with other clubs. He’s free to join any club as his contract runs out in June.

In other words, Juventus have given up trying to persuade Dybala to stay in Turin.

Romano previously stated that Dybala “will leave Juventus as a free agent”, which would give United a boost in their reported attempts to sign him, and at 28 it’s possible that he is reaching the prime of his career.

Dybala will leave Juventus as free agent. There was full verbal agreement last October for €8m plus €2m net salary until 2026 – then Juve decided to change their proposal. ⚠️🇦🇷 #Dybala

Paulo’s not happy with current, new conditions and he will now open talks with other clubs. pic.twitter.com/69UDfrJLGC

United have been short of goals this season, while Dybala has managed 19 goal contributions in 29 games across all competitions, so it makes sense that the club would monitor his ongoing situation.

Moreover, with the likes of Edinson Cavani and Anthony Martial both likely to leave Old Trafford this summer, the availability of the Serie A hitman could prove tempting to the next manager.

That being said, it wouldn’t surprise me if United went for a younger player in attack.

Benfica’s Darwin Nunez looks like one of the best alternatives to Erling Haaland out there.

Let us know in the comments if you think Dybala would be a good signing for United? He will be demanding a big deal since it will be a free transfer.