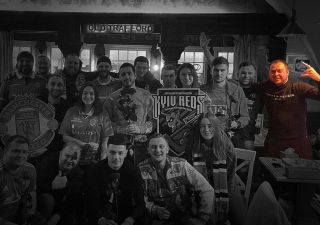 We are deeply saddened to hear that the founder of a Manchester United fan group was tragically killed by Russian troops during the invasion of Ukraine.

Oleksandr Kukin, who set up the Kyiv Reds supporters’ group back in 2002, was trying to help his family escape the capital of Ukraine when his car was shot at by Russian soldiers.

He was killed as a result while his wife Alina and their daughter were left injured.

“Back in 2002, twenty years ago, Oleksandr started Manchester United supporters movement in Kyiv. Later he refocused on his family and could not dedicate all his time to our supporters club, but has often frequently joined us at Bestia Pub to enjoy the Red Devils play. This photo (shown above) shows Aleksandr’s sincerest emotions during the War of Roses derby, 20 February 2021.

“Two weeks ago he tried to evacuate his family from the territory temporarily occupied by Russian armed forces, their car was shot by invaders. Oleksandr’s wife and daughter have both gone through surgery and are now hospitalised, and we regret to say Oleksandr could not make it through.

“During his funeral, family placed a band with Manchester United logo in his coffin, they all knew how much he loved our club. As the famous United chant goes: ‘Going on up to the spirit in the sky, it’s where I’m gonna go when I die, when I die and they lay me to rest, I’m gonna go on the p*** with Georgie Best…’

“You will always be remembered, my friend!”

Oleksandr Kukin, one of the founders of Kyiv Reds, has been killed by Russian invaders. His wife and child also shot and injured as they tried to escape. Sickening. pic.twitter.com/2215mDNwUb

The post in question, shared above by Duncan Drasdo of MUST, includes a picture of Oleksandr’s wife and their daughter lying in hospital beds.

Kyiv Reds have added details for people to send donations whilst they recover.

Manchester United responded to the shocking news by promising to explore a number of ways in which they can offer its support to the Kukin family.

We would like to send our condolences to the Kukin family during this incredibly difficult time. From one Red to another!