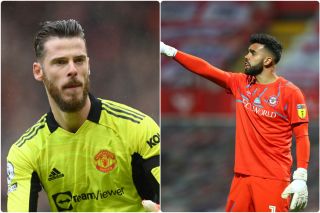 Brentford goalkeeper David Raya has been questioned about Luis Enrique’s decision to select him over Manchester United’s David de Gea in the latest Spain squad.

Enrique, who has been linked with the United job, named his squad for Spain’s upcoming friendlies against Albania and Iceland but there was no room for De Gea.

United’s first choice goalkeeper has been a solid performer between the sticks this season, although Spain’s manager clearly sees it differently.

“People are going to have an opinion, that’s for sure,” Raya told Cadena SER. “There will be people who understand it and others who don’t.

“I’m very happy to have been selected, and I’m going to try to do my best. I would like to make my debut in Barcelona, which is my home city, but if I make my debut, I am more than satisfied.”

There is no denying that Raya is a good goalkeeper, but it was surprising to see him selected over De Gea.

The Brighton shot stopper has kept five clean sheets in 15 Premier League matches this season, and some might argue that he suits Spain’s style of play better than De Gea does.

Raya is more comfortable with the ball at his feet than De Gea. Plus, he is a lot more willing to come off his line, which is something Enrique demands from his keeper.