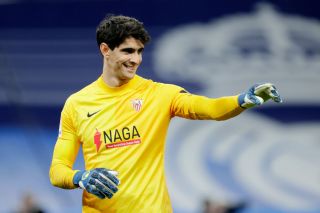 The mainstream media are suggesting that Manchester United could replace two goalkeepers in the summer, which seems pretty dramatic.

For starters, Newcastle United have renewed their interest in back-up goalkeeper Dean Henderson, according to the Daily Mail.

There was transfer talk involving Henderson and Newcastle midway through the season but a move never materialised. Henderson stayed at Old Trafford and remained stuck behind David de Gea in the pecking order.

However, it is thought that the academy graduate could force a move away in the summer in a bid for regular game time.

The Magpies wanted the 25-year-old shot stopper to replace Martin Dubravka between the posts, but the deal fell through in January.

United could also move for old boy Sam Johnstone if they dip into the market for a new back-up keeper in the summer, as per The Sun, with the free agent set to leave the Hawthorns – but West Ham, Tottenham and Southampton are also said to be tracking the 28-year-old’s future.

Meanwhile, United are being linked with Sevilla goalkeeper Yassine Bounou as a potential replacement for David de Gea, who ironically could win the club’s Player of the Year award. The Spaniard was left out of Luis Enrique’s Spain squad for the upcoming international break.

The Mirror claim United have been watching Bounou for several months and are understood to have asked to be kept in the loop of his situation at his club.

Let us know in the comments section if you think United need a goalkeeper clear out this summer.