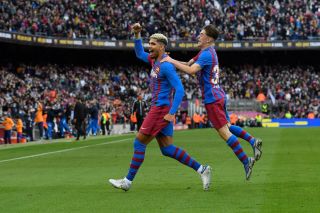 Manchester United are reportedly stepping up their interest in Barcelona defender Ronald Araujo.

The Uruguay international has become a key figure in Barcelona’s defense this season, especially under new manager Xavi, who has helped turn things around at the Camp Nou.

Araujo scored in Sunday night’s 4-0 win over rivals Real Madrid, but Barcelona still have a lot of catching up to do in order to challenge for the title this season.

It’s been reported by a number of outlets that United would like to bring Araujo to Old Trafford this summer, which would definitely put Harry Maguire’s future as captain in doubt.

Spanish outlet El Nacional claims United are preparing a £33.6m bid for Araujo, who is out of contract at Barcelona next year.

Moreover, there has been claims that Barcelona failed in their bid to agree new terms with the talented defender and that could put United in a stronger position to prize the Uruguayan away.

It’s set to be a busy summer for United, but the next manager must address the problems that exist at the back and in midfield, and some might say the spine of the team needs changing.

Araujo would be a good fit alongside Raphael Varane and it could spell the end of Maguire’s horrid spell at the club.