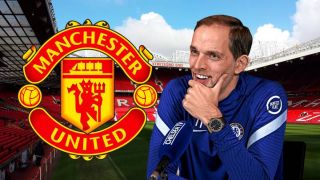 Manchester United have reportedly made an inquiry about Chelsea manager Thomas Tuchel as part of their process to find a new manager.

The German coach has recently been linked with the vacant job at Old Trafford due to the uncertain future of Chelsea Football Club.

Former Liverpool defender turned Sky Sports pundit, Jamie Carragher, expressed his opinion on Tuchel by suggesting that United should move in quickly for the talented manager. This angered some Chelsea fans but Carragher went on to call them hypocritical.

According to Sky Sports Germany journalist Florian Plettenberg, United have made an inquiry about the 48-year-old, who delivered the Champions League in his first season at Stamford Bridge.

Update #Tuchel: Yes, #MUFC is interested due to the uncertain future of Chelsea. They have inquired about him. But: Tuchel loves the club, he wants to stay at #CFC, his family is happy in London. He doesn’t think about a move to Manchester United actually. @SkySportNews @Sky_Marc

United are clearly interested in Tuchel but right now we appreciate that his focus is on ending the season strongly at Chelsea.

Plettenberg adds that Tuchel is not thinking about a move to United.

Tuchel may find that there is no way to improve this Chelsea side without a clear sense of direction from above, which they don’t have anymore under Roman Abramovich. They could also lose a number of key players like Antonio Rudiger in the summer.

Meanwhile, a new report from the Manchester Evening News claims that Ajax coach Erik ten Hag is currently the preferred option, with Mauricio Pochettino among the frontrunners too.

Let us know who you want as United manager next season in the comment section.