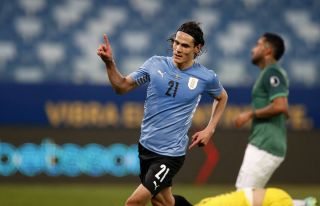 Manchester United duo Edinson Cavani and Facundo Pellistri have been named in the Uruguay squad for the upcoming 202 World Cup qualifiers against Peru and Chile.

Cavani, who is expected to leave United at the end of the season, has been included in the squad despite missing lots of football in the last few months.

United loanee Pellistri has made 20 appearances for Alaves this season and he recently shined whilst playing for his country.

Diego Alonso has announced his 26-man Uruguay squad for the decisive World Cup qualifiers vs. Peru and Chile next week. pic.twitter.com/3Is4KgR7iy

Cavani has not played anywhere near enough for United this season and Ralf Rangnick will be hoping he avoids picking up another injury while away with Uruguay.