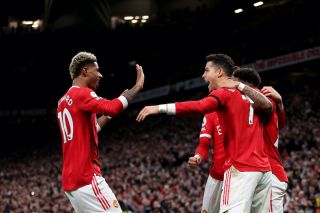 Cristiano Ronaldo has one year left on his Manchester United contract but that has not stopped speculation over his future.

The Reds have gone five seasons without a trophy after crashing out of the Champions League on Tuesday night. We reached the last-16 but were unable to deal with Atletico Madrid’s dark arts over two legs.

Fans have debated over whether Ronaldo will leave before his contract expires, but according to a recent report from Spanish outlet AS, CR7 has agreed to stay for one more season after the club promised to hire a top manager.

The report doesn’t name who that manager is, but it could be one of the following: Erik ten Hag, Mauricio Pochettino or Thomas Tuchel. Although hiring the current Chelsea manager feels like wishful thinking at this point.

Ronaldo came back to United as a club legend, but the 37-year-old has been subject to harsh criticism from the second returned, with many pundits choosing blame him for the team’s shortcomings.

Moreover, criticism has followed Ronaldo throughout his career, but with an incredible 807 career goals the Portugal star can still have an influence on rebuilding the club. He is coming to the end of his career but United have a better chance of winning football matches when he plays.

Edinson Cavani, Paul Pogba and Jesse Lingard are set to leave Old Trafford as free agents this summer, so it’s not like the next manager will have plenty of attacking options unless he spends big in the transfer market.

That’s why I think Ronaldo should stay for another season.