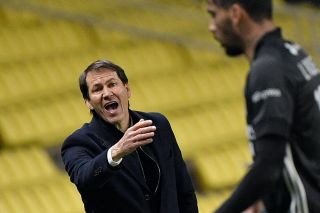 Rangnick moved to Old Trafford following the dismissal of Ole Gunnar Solskjaer. The German agreed to manage the team until the end of the season before moving into an advisory role.

United are looking for a new manager in the meantime, with Chelsea’s Thomas Tuchel joining the list of candidates in recent weeks. The Reds crashed out of Europe this week to make it a fifth season without silverware.

However, Erik ten Hag and Mauricio Pochettino are the frontrunners, with a decision set to be made in the coming weeks.

Former Lyon boss Garcia has now revealed he was in the running to become manager at Old Trafford.

“I was sent all over the football planet, with real news and fake news too, it’s quite funny to read that,” Garcia told Le Figaro, as cited by Sport Witness. “I had several proposals, in England, Spain and France, but the most advanced, and which really came close, was with Manchester United.

“They made the choice of Rangnick, but that also testifies to the international recognition that I can have, where the leaders only look at the results. My two places as Italian vice-champion with AS Roma, a Europa League final with Lyon and a Champions League semi-final with Lyon, that counts in the eyes of some.”

Garcia also tells a story about the interview process after travelling to England for talks with United’s officials.

“In Manchester, the interviews went pretty well,” Garcia said. “I saw John Murtough and Darren Fletcher, I told them I had to work on my English and Darren, who is Scottish, had a cool joke telling me that I did not yet have the level with the Scottish accent to answer, but that it was very good.

“I find it respectful to speak the language in the country where you work. At Marseille or Lyon, I waged war on my players to take French lessons. When you see [Carlo] Ancelotti speaking our language despite leaving PSG, it’s classy.”

Appointing an interim manager is never ideal and it only usually happens when teams fire their managers midway through the season, but I still think Rangnick has done a decent job despite not exactly getting the so-called ‘new manager bounce’ from his players because United are still drawing too many matches.