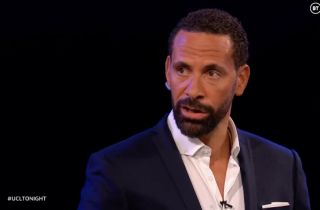 Manchester United have gone five seasons without a trophy.

Rio Ferdinand was asked about the ongoing trophy drought on Wednesday night, while covering the Champions League for BT Sport.

The former definitely doesn’t necessarily believe that addressing one situation, like the vacant manager position, is enough to take United to the promised land.

Ferdinand says the club needs to look across the board and improve in every area.

As Man United's trophy drought extends to five seasons, @rioferdy5 shares his thoughts on what needs to change at Old Trafford 🔴#UCLTONIGHT pic.twitter.com/iB1JfQTrfF

Ferdinand talks about the need an elite manager but says he will need the right people working around him. All eyes are on John Murtough, Darren Fletcher and, of course, Richard Arnold.

Funnily enough, I spoke about United’s trophy drought on Sky Sports News yesterday morning, and I stressed a stronger line by calling for the Glazers to sell up.

Everyone knows 5 seasons without a trophy for Manchester United is failure. Some thoughts on #MUFC for @SkySportsNews. pic.twitter.com/MhODuuQiSn

“Manchester United need new owners…” I can’t stress how important that is because the Glazers will never change.