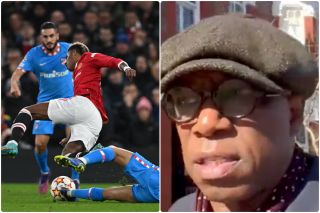 Arsenal legend Ian Wright has sent a message to Marcus Rashford telling the Manchester United star to stand his ground.

An incident occurred on Tuesday night at Old Trafford after United crashed out of the Champions League.

Rashford got an earful from some supporters outside the ground and he appeared to make a gesture before chatting to a nearby security guard.

The England and United star has apologised for his behaviour, but Ian Wright doesn’t think Rashford has anything to apologise for…

Wright argues that fans love giving it but can’t take it.

Although I can see the point Wrighty is trying to make, Rashford doesn’t need that happening again and telling fans to ‘**** off’ isn’t the best idea.