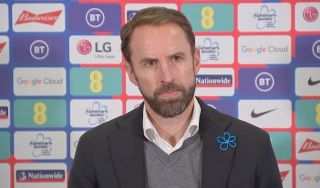 Gareth Southgate has announced his England squad for the upcoming international fixtures against Switzerland and Ivory Coast.

A 25-man squad has been named but Manchester United attacking duo Jadon Sancho and Marcus Rashford have missed out on a place.

Only two players received the call from Southgate this time around, with Luke Shaw and Harry Maguire selected, and they both should count themselves lucky on the back of poor performances this season.

Although Rashford’s exile will come as no surprise following his form of late, Sancho’s absence will raise some eyebrows because it could be argued that he has been United’s best player since the turn of the year.

Addressing both players’ exclusion, Southgate told reporters via Sky Sports: “Jadon, without a doubt, over the last few weeks, his performances have improved for Manchester United.

“But it’s an area of the field that we have got really big competition for places.”

Gareth Southgate explains his choices for the international double header with Marcus Rashford and Jadon Sancho left out of the England squad, and Marc Guehi earning his first call up 👇 pic.twitter.com/U105vEOqwU

On Rashford, he said: “He’s in the same position as everybody else. Whether they’re in the squad or not in the squad, they’ve all got to play well over the next period. Towards the end of this season and in particular the beginning of next season.

“It’s a difficult time for him, he’s clearly not at his best but there’s plenty of time.

“We know a lot about Marcus anyway. We know what he can bring to us and hopefully he can rediscover that form that we know he is capable of.”