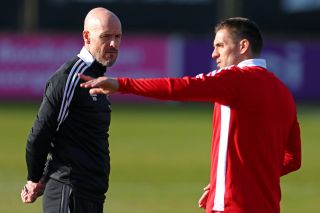 Manchester United have more work to do before appointing a new manager.

The biggest task right now is to identify the right man from the list of preferred candidates for the job.

A number of managers are believed to be in the running – including Mauricio Pochettino, Erik ten Hag, Thomas Tuchel, Luis Enrique and Julen Lopetegui — but the club has not made a final decision.

However, according to the Manchester Evening News, Ten Hag is United’s preferred option to become their next manager.

The Dutchman, 52, would command a low compensation fee because his Ajax contract expires next year. They were knocked out of the Champions League on Tuesday night after losing to Benfica. Meanwhile, Ajax are two points clear on top of the Eredivisie.

Fellow frontrunner for the job, Pochettino, is also out of Europe’s biggest competitions after Real Madrid beat PSG over two legs. The former Tottenham Hotspur manager is likely to be in a new job next season, but it doesn’t look like that will be at United.

Let us know in the comment section if you think Ten Hag is the right man for United?