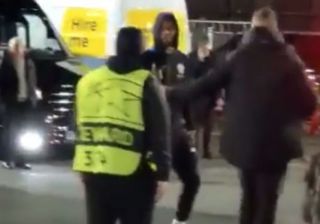 For starters, there is only one video and we have no idea what else was shouted in Marcus Rashford’s direction, but he certainly didn’t look happy.

Rashford came off the bench and performed abysmally in United’s 1-0 defeat against Atletico Madrid, like most of United’s substitutes on the night, and crashing out of the Champions League only made matters worse.

It’s unclear from the video below what sort of gesture Rashford makes towards the fans, but there are suggestions on Reddit that he used his middle finger after something was said in the crowd.

Let’s also not act like Rashford doesn’t receive incessant abuse online, from people who claim to be fans of the club but persist with slagging off our own players, but it still doesn’t look good on his behalf.

No words for this Rashford 😬 pic.twitter.com/fG5hNsb6wi

If true and Rashford used his middle finger, that was a bad move, especially when nothing bad can be heard in the video – just a mere criticism about his performance which I think is fair game.

But sadly none of us know what else was shouted or what he was responding to.

Of course, footballers clashing with fans is nothing new. Roy Keane had no problem telling one spectator at Old Trafford what he thought about him earlier this season.

The mood is bad around Old Trafford right now.