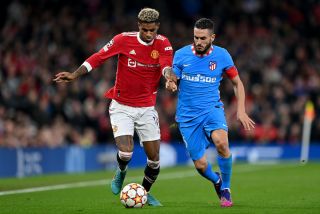 Marcus Rashford admits emotion got the better of him last night after being heckled by Manchester United fans.

A video has done the rounds online following the 1-0 defeat to Atletico Madrid. It shows the Manchester United forward appearing to turn on a supporter.

After being shouted at by members of the crowd, Rashford responded with a gesture before talking to a nearby security guard, but they were positioned too far away from the recording device to hear what was said…

Rashford has responded to the video with a statement on social media. It read: “A video can paint a thousand words and in this case inaccurate info being shared on social media.

“Guys for weeks I’ve been heckled, threatened, questioned and last night my emotion got the better of me. I’m a human being. Reading and hearing that stuff about yourself everyday it wears you down. No one is more critical of my performance than me.

“But what you see in the video lacks context. I had been heckled from the minute I stepped foot outside the ground, abuse not just aimed at my football.

“People were looking for a reaction from me. Phones were at the ready.

“Of course, I should have just walked straight past and ignored it, that’s what we’re supposed to do right? I want to clarify two things.

“I’m not entitled. This isn’t ego.

“And in that moment it was silly but I was being human.”

There are 2 sides to every story. pic.twitter.com/Xl2PRyaX2c

We took caution with our report after seeing the 30-second long video because without being there at that moment in time, we don’t know what was said. On top of that it was never clear that Rashford used his middle finger when making the gesture!

At least Rashford took time to clarify things and I think he can be excused given all of the criticism he has received in recent months.

I’m sure he will learn from his mistake.