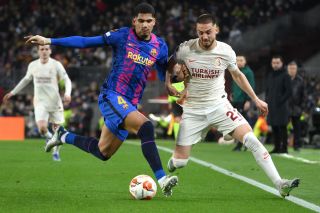 Barcelona could lose star defender Ronald Araujo this summer, with suggestions that Arsenal and Manchester United will be in the race for the Uruguayan’s signature.

According to Mundo Deportivo, an agreement over an extension with Barcelona is miles off, with United ‘pushing hard’ to sign Araujo.

The 23-year-old has quickly established himself as one of the best centre-backs in Spain and United, who will be appointing a new manager in the summer, look certain to bolster their defence in the transfer window.

Harry Maguire has performed abysmally this season and he was one of the worst performers (again) in last night’s 1-0 defeat against Atletico Madrid.

Barcelona have reportedly tried to tie Araujo down to an improved contract, but to no avail, and it looks like United are trying to move in on the Uruguay international.

It seems Arsenal are also trying to lure Araujo away from Barcelona, with Gerard Romero reporting on offers made to the player’s entourage ahead of the summer transfer window.

The Gunners are believed to have tabled an offer to the player worth 6m, which is apparently 2m less than what United are willing to offer the defender.

It is worth noting that Romero is not a verified source on Twitter, so it may be worth reading more into what Mundo Deportivo have reported this week.