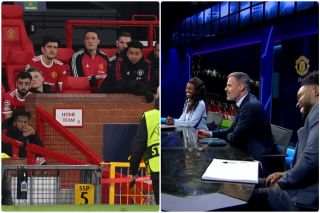 It could be argued that we’ve reached a point where Maguire should be dropped in favour of Victor Lindelof. The fact Ralf Rangnick keeps selecting the England international to partner Raphael Varane is worrying, and his performance against Atletico Madrid in the Champions League last night was far from convincing.

Renan Lodi’s header after 42 minutes dumped United out of the Champions League at the last 16 stage on Tuesday night, extending the club’s search for silverware to five years.

Maguire was substituted in the second half when Rangnick brought on Juan Mata in a bid to push for an equalising goal. Ironic cheers were heard from sections of the stands at Old Trafford as he came off and I think that shows you how much pressure he is under at the moment.

And in response, former Liverpool defender Jamie Carragher told CBS Sport that Maguire needs to improve soon (via The Metro): “The Manchester United captain who cost £80m was taken off in the game. He is going through the worst moment in his career right now. We all have that moment, I can picture it now when I was playing.

“This is something that Harry Maguire is going through right now and he has to get out of it very quickly otherwise he won’t be at the club because the standards at Manchester United are so high.

“Of course he wants to [get out of it] but his head will be all over the place, he is getting criticism left right and centre. He’ll be criticised again – I think the crowd actually cheered when he went off. Which isn’t a nice thing for anyone.

“I’ve always been a fan of Harry Maguire. He gets criticised because he cost £80m. Virgil van Dijk cost £75m and is the best defender in the world.

“Harry Maguire is not that but he doesn’t set the price. He had a great summer with England at the Euros but this season has been a disaster and he almost just needs to get to the end of the season and just forget about football and get away.”

Maguire may need a break away from the team but I can’t see how he has a future at the club if United are looking to play with a high defensive line. Otherwise, the England international will get caught for pace and United will ship more goals again next season.

A new centre-back must be on the agenda in the summer.