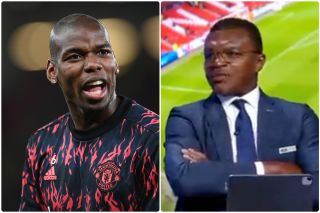 Paul Pogba was named on the bench for the crucial match but Desailly spoke out against his compatriot on beIN SPORTS after calling the midfielder “lazy” and a “cheat”.

“Quality-wise you cannot compare Pogba to Fred or McTominay or Matic but he is lazy, he’s lazy. If you allow him too be some kind of playmaker behind Ronaldo he will take advantage of it,” said Desailly.

“When it gores well he is fantastic, but when it doesn’t go well — offensively he hasn’t brought what everyone was expecting. And at the same time, he will cheat a little bit. He will not drop back and help the midfield on the defensive intensity.”

"He's lazy, he cheats a little bit and doesn't help with the midfield defensively!" 😠

World Cup winner @marceldesailly doesn't hold back on his criticism of Paul Pogba who is on the bench for Man United tonight. #UCL #beINUCL

This may seem harsh because Pogba has played well under Ralf Rangnick, although he was back to being his inconsistent self against Tottenham Hotspur at the weekend, which led to him being dropped last night.

In the second half, Pogba replaced a disappointing Bruno Fernandes but the Frenchman failed to make much of an impact on the game.

United are now knockout of the Champions League and Pogba’s future remains unresolved. It could be a long summer for the club.