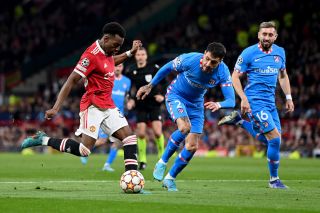 Manchester United starlet Anthony Elanga has earned his first call up to the senior Sweden squad for the first time.

Elanga has enjoyed a breakthrough season at United following Ralf Rangnick’s appointment in December, and he will be joined by team-mate Victor Lindelof in the Sweden squad.

Lindelof will be expected to keep an eye out for his younger team-mate, especially until he familiarises himself with other members of the squad, but the same thing happens when an academy player joins the first team at United.

It’s all part of the process of becoming an international footballer.

Sweden squad including Elanga and Lindelof via @svenskfotboll:

However, Elanga has impressed at U21 level for Sweden and he’s come under the eye of the football world after scoring against Atletico Madrid at the Wanda Metropolitano.

“We have followed Anthony closely and he has made a positive impression both in the Under-21 national team and in the club team,” Sweden manager Janne Andersson said, as per The Athletic.

“A fast and good deep lead player and a good finisher. We have had some contact recently and it will be fun to get him into our squad.”

No wonder Andersson is looking forward to working with Elanga.

At 19-years-old, he has thrived on opportunities in the first team this season, often giving United something different in attack.

Elanga was unlucky not to score in the second leg against Atletico Madrid when Jan Oblak used his face to stop an effort from close range.