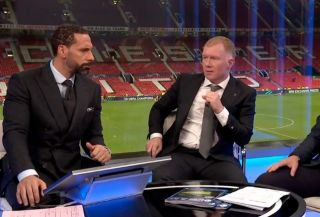 These are bleak times for Manchester United.

Five years without a trophy and Paul Scholes fears things could get worse before they get better.

The former Manchester United midfielder, who knows what it takes to be successful at Old Trafford, told BT Sport that the club are lacking a proper coach after losing 1-0 against Atletico Madrid in the Champions League.

He didn’t go all out and disrespect Ralf Rangnick, but Scholes feels an elite manager would take the team in the right direction.

However, Scholes thinks there is more pain to come for United fans and says it could take 3 or 4 years to challenge for the Premier League again.

“We’ve had a lot of pain, and there’s more to come,” Scholes told BT Sport.

"Three or four years to be challenging for the league? I'd snap your hand off for that."

He added: “Three or four years to be challenging for the league? I’d snap your hand off for that.”

Owen Hargreaves weighed in with his opinion that United should look to hire more ‘football people’ and names the likes of Scholes and former team-mate Gary Neville as stable candidates to do a job.

Do you think Scholes could do a job at United? He’d probably still walk into the first team…