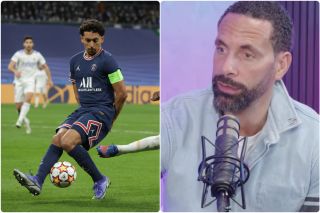 The Reds have looked unsteady at the back for the majority of the season, conceding 40 goals in the Premier League so far this term, and new signing Raphael Varane has managed to start just 15 games in the league since his arrival from Real Madrid.

United captain Harry Maguire has come under most fire for his sub-standard performances and he scored an own goal in the 3-2 win over Tottenham on Saturday.

One of the players being linked to United is Barcelona defender Ronald Araujo, who is about to enter the final year of his contract at Camp Nou.

Ferdinand is also a fan of Paris Saint-Germain’s Marquinhos.

He thinks United would be in a strong position defensively if they signed Araujo and Marquinhos.

Speaking on Vibe with Five, Ferdinand’s very own YouTube channel, the former England international said: “I would sign Marquinhos.

The former United defender also says Maguire needs an element of luck to improve his form.

“What’s killing for him is it seems week after week someone is questioning something about Harry Maguire, and it’s quite glaring,” Ferdinand added.

“And listen, we’ve all been through moments like this, in my career it happened. But a lot of the time it’s luck.

“There’s moments in careers like Harry Maguire is going through now where everything you seem to do there seems to be a problem, there’s a mistake.

“Every mistake you make gets punished and highlighted. Whereas sometimes in my career where I was making mistakes but they didn’t score, or the keeper pulled me out of it, or Vidic made a tackle.