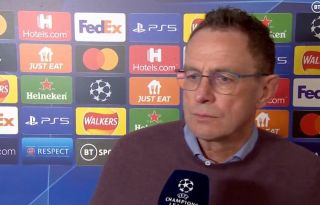 The end of the road for Manchester United in Europe.

The Reds lost against Atletico Madrid at Old Trafford on Tuesday night, in what was a model away performance from Diego Simeone’s side, involving lots of dirty tactics and favourable decisions from the referee.

A goal from Renan Lodi won the tie for the Spanish champions, but it was the referee who stole the show on the night. He made a number of questionable decisions throughout the game.

United were denied a free kick for a foul on Anthony Elanga in the build-up to Lodi’s goal. The referee waved play on much to everyone’s disbelief in the stadium.

It honestly feels like we got shafted on the night, especially after a convincing first half display.

Interim manager Ralf Rangnick complained about a number of decisions at full-time but he also commented on how the players were unable to convert that first-half energy into goals.

“Some curious refereeing decisions, four minutes of extra-time was just a joke,” he told Des Kelly after the match.

"We couldn't convert that first-half energy into goals."

"Some curious refereeing decisions, four minutes of extra-time was just a joke."

Ralf Rangnick shares his view as Man Utd are eliminated from the #UCL by Atletico Madrid.