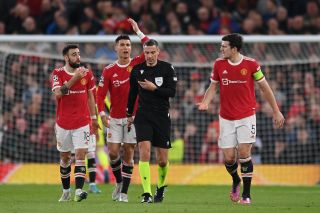 Manchester United’s Champions League run has come to an end in the round-of-16 after losing 2-1 on aggregate against Atletico Madrid.

Although the Reds went in 1-0 down at half-time, they were the better side in the first 45 minutes but failed to create enough chances after the break.

Here are our Manchester United player ratings after a disappointing night at Old Trafford (starting players only):

Brilliant save to prevent Rodrigo de Paul in the first-half. I don’t think he could’ve done a lot for the goal after Renan Lodi was left alone at the back post. His communication and distribution were subject to criticism again.

Let Lodi score from close range to kill the tie. No end product when he got forward.

Unlucky not to score when Oblak was forced into a terrific save. A force from the back.

Played the game with his head up in the clouds.

A real weakness down the left tonight.

He was up against it tonight but this is the level McTominay needs to reach if he wants to be a future United midfielder.

Amazing piece of skill in Atletico’s box in the first-half but lost his spark after the break.

Missed a close-range chance early on. It was a quiet performance other than that.

Did more moaning than anything else. Rightly hauled off.

Quieter than usual but I thought he dealt with Atleti’s pressure well. Nowhere near enough end product, though..

Couldn’t get past Atletico’s defence and strayed too far away from the box at times.