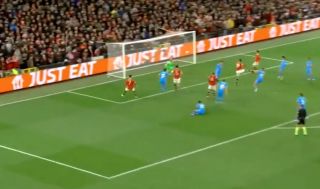 Manchester United are out of Europe after losing against Atletico Madrid at Old Trafford tonight.

The Spanish side won 1-0 on the night and 2-1 on aggregate. They’re a team with a lot of experience and they knew all the dirty tricks in the book, which was only helped by the fact they had a lot of favourable calls from the referee.

We knew in the second half that Atletico Madrid would chase the ball with everyone behind it. United didn’t create enough chances to claw a way back into the game but we had a few.

Raphael Varane had a great chance to equalise after 76’ minutes when he forced a terrific save from Jan Oblak, who pulled off another amazing save with his face in the first-half.

It’s a huge blow to be knocked out of the Champions League because it was the only trophy we had a chance of winning. I’m not saying I thought we’d go all the way in Europe this season but a longer run would’ve been nice.