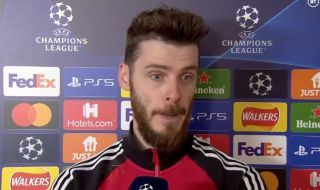 Manchester United crashed out of the Champions League tonight losing 2-1 on aggregate.

David de Gea said it is difficult to put into words how the players feel right now, but he spoke well after the match, as it spells the end of United’s hunt for a trophy for a fifth season in a row.

It took one goal on the night for Atletico Madrid to reach the quarter-finals.

De Gea was beaten by a Renan Lodi header at the back post, but it was hardly the Spaniard’s fault that Atelt’s wide man was left with acres of space.

“It’s difficult to put into words how we feel,” De Gea told BT Sport after the match.

"It's difficult to put into words how we feel…"

"Five years without a trophy is not good enough. It's hard."

De Gea adds that it’s “not good enough” for this club to go five years without a trophy. He says the team need to keep fighting and trying their best in the future.

However, everyone knows that actions speak louder than words.

The new manager will be tasked with fixing that next season.